Call me traditional and boring but I really believe that there are certain situations where a suit is the only option.

A few weeks ago I was in a London estate agency. The 27 year-old employee who was helping me noticed that I’m a stylist and told me that the reason she got her job was because she was wearing a suit!

When she turned up for her interview the other three final applicants were wearing much more casual clothing – one was in jeans! Obviously, she got the job and was told that one of the main reasons was that she understood the dress code of the company and had dressed appropriately.

A good friend is a Barrister and when he is summing-up a case he always wears his special suit. Being totally confident about the way he looks, knowing that everything he’s wearing is smart and professional enables him to perform at the top of his game.

It’s one less thing to worry about and lets him get on with the matter in hand. And it’s what his clients expect of him.

I was talking to a woman in a Jacuzzi – as you do! She runs a successful cottage letting business in the Lake District. A young rep called round to see her husband about switching their insurance to his company. She’d seen him as he approached the cottages and he was so badly dressed in “a pair of casual trousers and a bomber jacket” that she refused to waste her time meeting him! He didn’t get the business!

I rest my case. Obviously, it’s not always necessary to wear your best suit but make sure it’s dry cleaned and ready to go should the occasion arise! 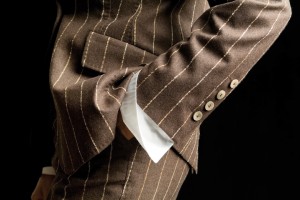